Despite the global success of its economic miracle, South Korea continues to consistently underperform in international comparisons of women’s rights. As the world celebrated International Women’s Day on March 8th, Korea was painfully reminded that it still has a long way to go to achieve gender equality.

According to OECD’s latest data[1], South Korea has the worst gender pay gap at 31.5 percent among member countries. This translates to Korean women earning 31.5% less than men on average, almost a 20% higher than the OECD’s average.

The country also ranked last out of 29 countries on the Economist’s Glass Ceiling Index [2]which measures a country’s performance along ten metrics, including the gender pay gap, parental leave, the cost of childcare, educational attainment and representation in senior management and political jobs. While examining jobs, education, health, and political representation, the 2021 World Economic Forum’s Global Gender Gap Report[3] showed that Korea ranked 102th in a list of 156 countries.

Given these concerning statistics, it would be reasonable to think about the issue of gender as a top priority for policy making, however this is not the case for Korea. On the contrary, gender-focused policies have taken a hit in the country’s political agenda since the newly President-elected Yoon Suk-yeol first began his campaign, backed by opposition party’s chairman Lee Jun-seok’s inflammatory anti-feminist discourse[4].

With a “humanist” stance, an antagonist attitude towards feminism, and a pledge to abolish the Ministry of Gender Equality and Family, Yoon ran a campaign that capitalized on validating a growing anti-feminist sentiment, fueling ideas such as ‘preferential treatment to women’ and ultimately, disavowing the feminist movement from Korea’s priorities. And while the campaign eventually led to his victory, a deeper dive into the voting polls shows a different story. The election was shaped by noticeable gender disparities among young voters in Korea. Young voters’ patterns are particularly important to understand because not only are they the backbone of the economy and productivity, but also are the ones mainly responsible for present and future demographic changes. 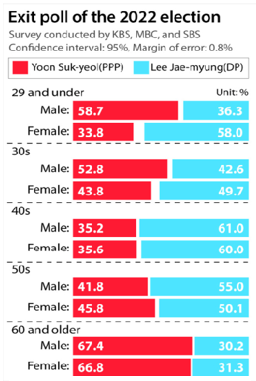 Young male voters in their 20s swung heavily for Yoon, with 58.7%. At the same time, Yoon’s brazen anti-feminist rhetoric led to backlash and greater support for Lee by young female voters, with 58%of women in their 20s— an almost mirror opposite trend from their male peers.

This voting pattern was also replicated among voters in their 30s, with 52.8% of men in that age group voting for Yoon and conversely 49.7%of women voting for Lee. These differences were not so evident in voters aged over 40.

Looking at the voting results, there are many narratives that show different realities of Korean society. However, we want to focus on the story of women, and why gender policies matter. Instead of falling into a trap of polarization, now is the time to remind people the importance of why gender policies should be a priority for Korea in terms of economic recovery and social growth.

According to OECD’s predictions, there is scope for raising employment rates and productivity to lift Korea’s GDP per capita growth by one to almost two percentage points[5]. Raising the employment rate and quality of jobs of Korean women, who are on average highly skilled, will strengthen the capacities of women as well as help spin back the wheel of growth.

As today, the gender employment gap for people aged 15-64 is nearly 18 percentage points, the fourth largest in the OECD[6]. This was particularly exacerbated by the pandemic, where women accounted for about 60% of the decline in employment[7]. This does not come as a surprise, considering that female employment accounts for most jobs in the social and service sectors. Not only that, much of the burden for childcare and elderlycare fell onto women, prompting them to either temporarily or permanently exiting the labor market.  A survey by CTMS found out that 49.3% of Korean mothers cited childcare as one of the main reasons for leaving the workforce during this pandemic[8].

Another main issue is that women form part of a relatively large share that are non-regular workers. Presently, around 2,762 Korean women are non-regular workers compared to 1,771 men[9]. Companies use non-regular workers for flexibility in modifying their workforce across their business cycle, given the difficulties of laying off regular workers due to substantial employment protection. In this sense, labor dualism is not only volatile but also traps a significant share of women in low-paying jobs with almost no chances of career mobility.

Equalizing the field of care responsibilities, whilst opening access and flexibility in the workplace is not only due but also carries great consequences in family decision making. There are many factors that contribute to women’s fertility behaviors, such as perceptions of economic insecurity, combined with rising housing prices and the increasing cost of children’s education, which may be key contributors to Korea’s persistently low fertility rate. However, recent studies[10] tell us that decisions about childbearing are made in a broad socioeconomic and cultural context. For instance, women’s fertility decisions are heavily influenced by their capacity to balance professional work, domestic chores, and child-rearing obligations, which are further influenced by country-specific institutions such as education, family, labor market, policy, and gender relations[11].

In Korea’s current context, during the first half of 2020, 56.3% of South Korean women reported an increase in work related to taking care of family from the pandemic alone. And it’s not just women. Men as well suffer some restricting work policies that discourages balanced care roles. Korea allows men to take parental leave, but it is seldom used due to potential career harm in the workplace[12].

This is important because women that shoulder a disproportionate share of childcare duties become less willing to have children[13]. Korea that is currently undergoing the lowest fertility rate in the world hitting a record low of 0.84 last year in 2021, a number much lower than the replacement level of 2.1 that would keep South Korea’s population stable at 52 million[14].

What Korea needs is a culture of gender equality that is promoted within the workplace and at home that includes measures[15] such as introducing options to take parental leave for shorter periods at higher payment rates (as in Germany) to encourage take-up, especially by fathers, or easing access to parental leave, notably for non-regular workers and the self-employed.

Implementing gender policies that balances out and redistributes the weight of care can be of tremendous help in the betterment of socioeconomic settings within families, thus improving the potential to facilitate conditions for childbearing decision making.

Time to moving towards an equal society

Unlike what was portraited in Korea’s latest political stage, feminism stands to help women achieve equal access of opportunities across all areas to help create a truly equal society. The reality is that Korea lags immensely on gender equality, thus missing out on great resources and potential from half of its population.

This incoming narrative that purposefully centers on creating alienation between men and women not only harms Korean society but also hinders the country’s potential to become a well-rounded developed country. In a country where miracles become a reality, how long will it take to fully let women thrive and move towards true equality?

[7] Korea Economic Institute (2021), The Impact of the Pandemic on Women in the Korean Labor Market. https://keia.org/the-peninsula/the-impact-of-the-pandemic-on-women-in-the-korean-labor-market/