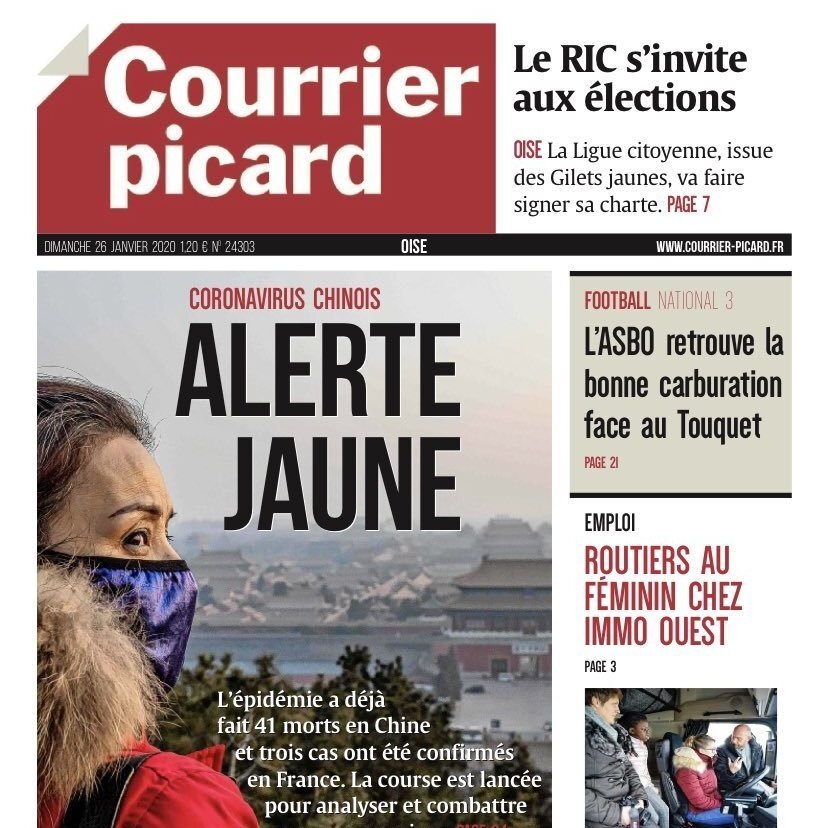 On January 26, 2020, the regional daily Courrier Picard published a newspaper covering the news about the coronavirus, rampant in China’s Wuhan since December 2019. “Yellow Alert” was its headline, and “The Yellow Peril?” the title of its editorial. Obviously, it triggered multiple and severe criticisms on social media, judging the newspaper as racist. For instance, Madjid Messaoudene, the elected official in Seine-Saint-Denis, has qualified it as an “unabashed racism” on his Twitter[1]. In the face of such a situation, Courrier Picard presented the same day his apologies “to all those who may have been sincerely shocked”[2].

The aforementioned event illustrates perfectly the old fantasy of ‘yellow peril’ that has been reactivated in France, and in many other Western countries, since the discovery of the virus in Wuhan. This racial color metaphor developed in the 19th century was intended to warn of the danger of Asian people ruling the world. Vincent Geisser, a researcher at the National Centre for Scientific Research and director of the journal Migrations Société (Migrations Society), explains that it is precisely the visibility of the Asian population in Occident, despite the distance separating the two continents, that is felt as frightening.[3] Hence, at the root lies the fear and fantasies of Westerners for a distant land, that is Asia, and more specifically China and Japan. Besides, as a market in Wuhan has become known as the fountainhead of the virus, the image of China as an underdeveloped country lacking hygiene and despisable has also been resuscitated.

Such ideological stigma has encouraged various xenophobic behaviors towards Chinese people as well as those asiatiquetées, neologism in French combining the word ‘Asian’, and ‘to be labeled’ to indicate Asian people (often from East and South Asian countries) seen as Chinese in the French collective unconscious.[4] Asian-run restaurants or food shops were deserted for fear of contamination, they were also subjected to racist tag such as “Coronavirus fuck off”[5]. Numerous physical and verbal violence against Asian people were also reported on social media. The number of complaints received by the Association of Young Chinese in France (AJCF) has tripled than usual, reaching over 100 cases in 2020 alone.[6] Such trivialization of anti-Asian racist behavior in France could be felt at an individual level: since the outbreak of the pandemic, the frequency I have been exposed to racist harassment has significantly increased, reaching 1-2 times a week at its worst.

However, the pandemic has only exposed an already existing discrimination in France against the Asian population that has gone unnoticed under the stereotype of “model minority”, a minority group perceived as socioeconomically more successful than other outgroups. In France, the Asian community has long been regarded as “hard-working” to such an extent that the ex-president Nicolas Sarkozy has referred to them as “models of successful integration” embodying “the value of work”.[7] On the other hand, such racialization of Asian people as a hard-working model minority has given rise to more stigmatizing stereotypes: that Asians are “quiet”, “docile” and “obedient”.

Typically, the problem of urban insecurity (assaults, snatching…) recurrent in several living neighborhoods in Paris and Seine-Saint-Denis has particularly affected the Chinese community of the Paris region in recent decades. The stereotype of “successful”, “rich” and “docile” Chinese, as well as their habit to favour cash rather than payment by card have made them an easier target to aim for.

The situation was especially critical in Belleville, the multiethnic district in Paris also known as the ‘Chinatown bis’. However, the victims of such violence rarely filed complaints. In addition to the fear caused by their illegal administrative status, their language barrier and their lack of familiarity with public institutions hindered them to take legal action.[8] It resulted in public ignorance of such attacks, confirming somewhat the stereotype of “quietness” attributed to the Chinese community.

The silence began to break down from 2010 onwards as the Chinese community of the Paris region took to the streets to protest against the racism and violence of which they were victims. Ya-Han Chuang, the sociologist at the French Institute for Demographic Studies (INED) identifies three transgenerational protests in 2010, 2011, and 2016 that constitute the “first foundations of its repertoire of actions”.[9]

All three manifestations resulted from fights between Chinese nationals and other populations in Paris, and therefore commonly denounced the problem of insecurity targeting the members of the Chinese community in the Paris region. Differences are however noticeable, which witness a process of political learning and local integration by the Chinese community.[10] 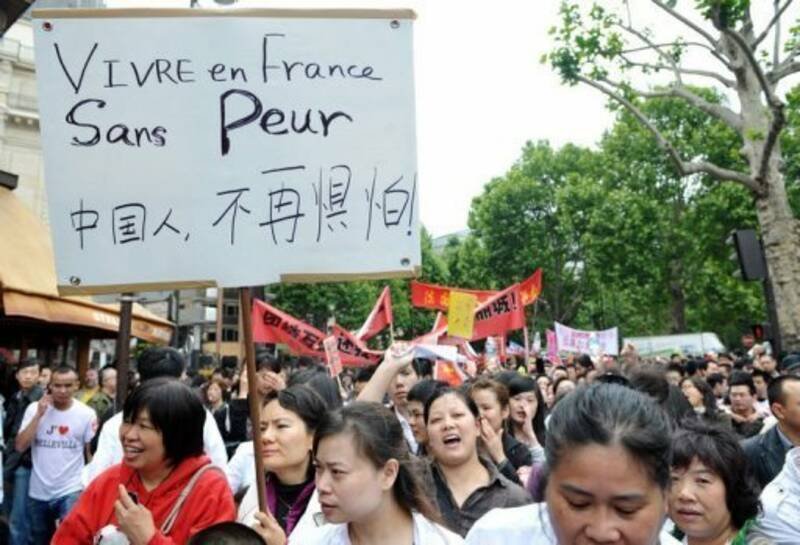 In 2010, the rally very much resembled a community protest. The parade was limited to the Belleville neighborhood. Despite Belleville’s multiethnic population composed of around 80 nationalities, the rally was ethnically homogeneous. Most slogans were in Chinese, with even the presence of China’s national flags. Organized by associations of 1st generation immigrant Chinese traders supported by the Chinese embassy, the urban insecurity was posited as an experience specific to all members of the Chinese community. In doing so, it has set an atmosphere of “territorial struggle” between the Chinese and other populations in Belleville.[11] Its watchword “No to violence, security for all. Let’s unite Chinese people!” reflects perfectly their point of view. Unsurprisingly, the manifestation has ended in violence followed by the confrontations with other populations in Belleville of Arabic/Black origins, as well as with the police. Despite this, the protest was an opportunity for Chinese immigrants to transform their identity until then experienced as a mark of humiliation and target of repressions into an exaltation of the affirmation of their origin.[12] 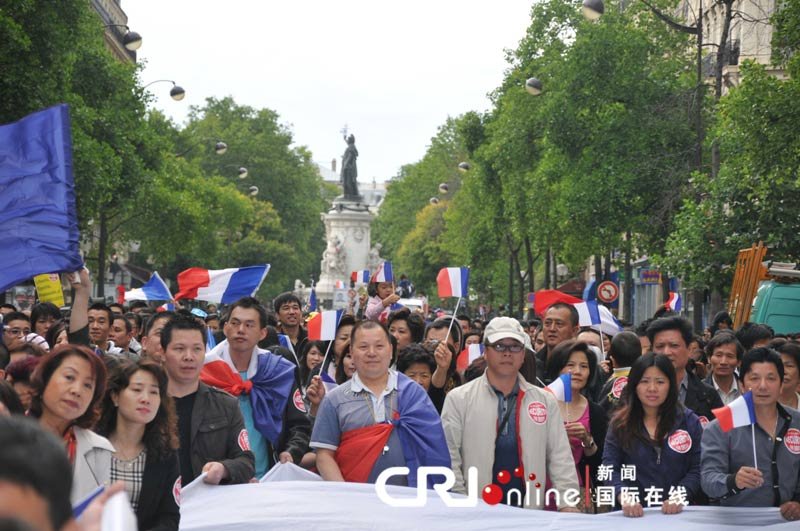 Despite the ethnic homogeneity, the protest in 2011 differs from that of the precedent year: the communitarian image had significantly faded away. Instead, a considerable effort was made to assimilate the Republican values into its claims and actions.[13] It was at the initiative of the Association of Young Chinese in France (AJCF), an association composed of second-generation Chinese immigrants, who took charge of the communication. The parade followed the classic route of Parisian protests, from République to Nation. French flags were everywhere, with the slogans written and exclaimed in French. The watchword “Liberty, yes! Equality, yes! Fraternity, yes!…and Security!” took up the national motto of France.

In sum, if the protest in 2010 resembled more of collective action of overseas Chinese residing in France, the manifestation in 2011 has shown the Chinese community’s desire to belong and their willingness to be part of the political landscape of ‘French diversity’.[14] 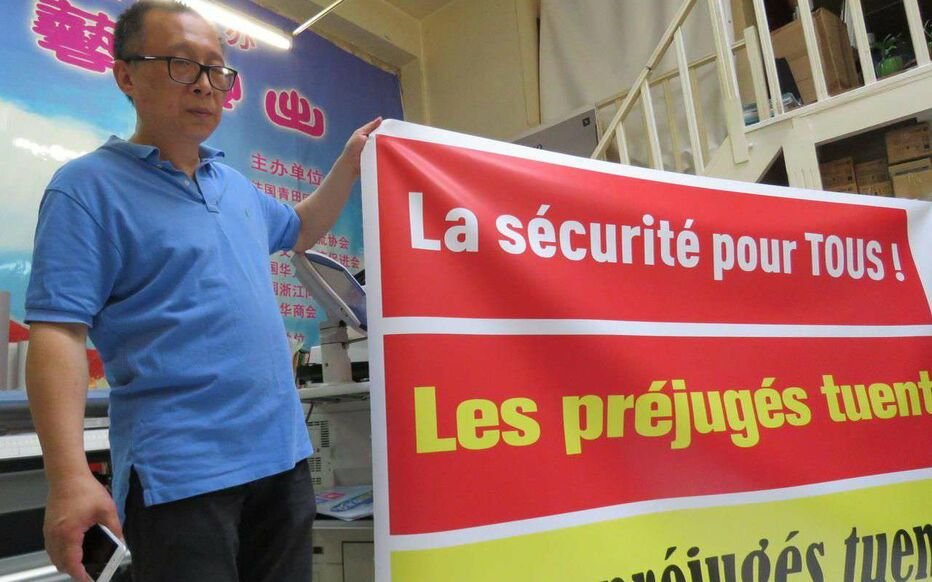 The 2016 protest was also the result of an incident concerning urban insecurity of which the Chinese community has found to be the easy target. The scope of its political demand was however much larger than the previous mobilizations: in addition to the original claim condemning the urban insecurity in the Paris region, it denounced the danger of stereotypes imposed on the Chinese community in France, and by extension, on minority communities in France; the slogan “Prejudice kills!” was the illustration of such a claim. Thefts and assaults on Chinese and Asian people were therefore thought and presented as the consequences of racist prejudices of which they are victims,[15] bringing this protest into the general movement of the fight against racism. Numerous political leaders, as well as anti-racist associations hence joined the movement, and have contributed to drawing more attention of public players and media. Besides, the slogan “prejudice kills!” has catapulted Asian youth to question the racist stereotypes that target them. Social media then became a “fertile ground” for discussions and for sharing their experiences around the prejudices and racism they are subjected to,[16] giving rise to a movement like #JeNeSuisPasUnVirus (#IAmNotAVirus) that has drawn a lot of attention from the media at a national and international level.

In this social atmosphere, the world was struck by the Covid-19 outbreak. While the pandemic has undoubtedly worsened the already existing anti-Asian hate in France, the growing awareness of structural racism against people “asiatiquetées”, and the diversification of the repertory of actions have greatly contributed to making such a phenomenon more visible.

[3] “Coronavirus: “The reference to the ‘yellow peril’ plays on fantasies and fears” according to researcher Vincent Geisser.” 20 minutes, 28 Jan. 2020, https://www.20minutes.fr/arts-stars/medias/2704775-20200127-coronavirus-reference-peril-jaune-joue-fantasmes-peurs-selon-chercheur-vincent-geisser

[4] @OrpheonNegra, “I’m sharing the text and hashtag created by a fellow adoptee who does not want her name mentioned to avoid the anti-Asian harassment and racism she is denouncing. Please spread her word. #IAmNotAVirus #coronavirus #AntiAsianRacism” Twitter, 27 Jan 2020, 9:09a.m., https://twitter.com/OrpheoNegra/status/1221706803836280832?ref_src=twsrc%5Etfw

[7] “Statement by Mr. Nicolas Sarkozy, President of the Republic, on Franco-Chinese and Franco-Asian relations, in Paris on February 16, 2010”, Vie Publique, 16 Feb. 2010, https://www.vie-publique.fr/discours/178215-declaration-de-m-nicolas-sarkozy-president-de-la-republique-sur-les-r.