This post dives deeper into the perception survey conducted in the soon-to-be-published report, The Necessity of University-led Social Integration Program: Based on Field Research on Refugees and Universities in South Korea. However, a full analysis of the survey was not thoroughly discussed in the report. The core focus of this article is to understand Korean university students on their perception of refugees within the society. The authors believe that this article will shed light on the details of the survey and further discourse upon the role of media in the integration of refugees.

Before the initial start of our own research, we read the UNHCR report on the Koreans’ perception of refugees which illustrates significant points that should be addressed in Korean society. The research showed that the number of people who disagreed on accepting refugees decreased from 56% to 53% since the Yemenis Crisis in Jeju due to the increasing basic understanding of Yemeni refugees (UNHCR, 2020). However, until today, Koreans have misperceptions about refugees. According to the UNHCR, the main reasons for the Korean public being against refugees were the burden of the group on government and taxpayers; and the possibility of an increase in crime rates and social issues. Misinformation that prevails in the media about refugee issues remains a significant reason for the negative attitude toward refugees. Among the general Korean demographic, females and people in their 20’s and 30’s maintained to be more conservative regarding the issue. Before the crisis, refugees were a very foreign issue to Korean media but as they emerged as a new issue in Korea, fake news rapidly started to spread.

Our team was curious if the same results were to occur in a campus setting. By conducting a perception survey, approximately 200 students in Seoul National University (SNU) were asked about their thoughts about refugees residing in Korea and their general image of them. We acknowledge the limitations of the survey as 200 is a small number when compared to the total number of enrolled students, thus making it difficult to overgeneralize the survey results. However, this survey still does show a glimpse of young Korean university students’ perception of refugees. There are three points from the survey that can be addressed.

First, Question 6 asked for the participant’s understanding of what determines a refugee status. Out of numerous choices, the participants were asked to choose multiple reasons for why an individual is eligible to obtain refugee status. The survey results in Figure 1 showed that 6.5% did not know at all and no one answered correctly. The determinants are race, religion, nationality, and oppression due to political opinion, but many choose only one of the four reasons or choose neither. For instance, 12.9% choose poverty as a determinate. 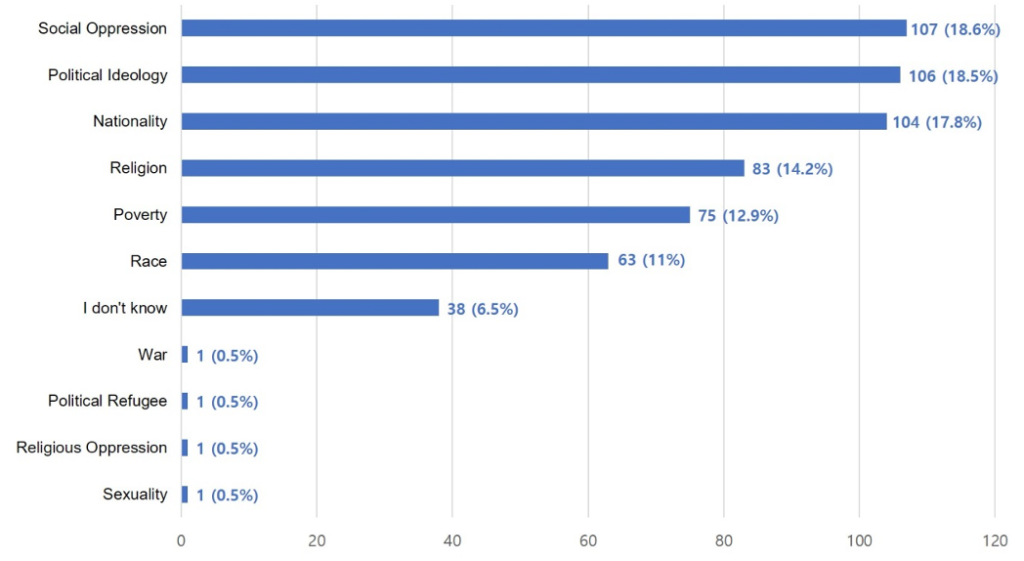 Second, Question 10 asked words the participants associated with the word ‘refugee’. The answers were roughly negative connotated words such as persecution, social anxiety, confusion, tax, foreigner, lack of cultural integration (Figure 2). In relation, the survey results of Question 10 do not come as a surprise as high rates of participants answered that the current refugee policy should be stricter. 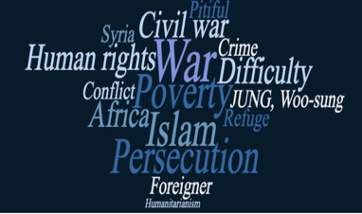 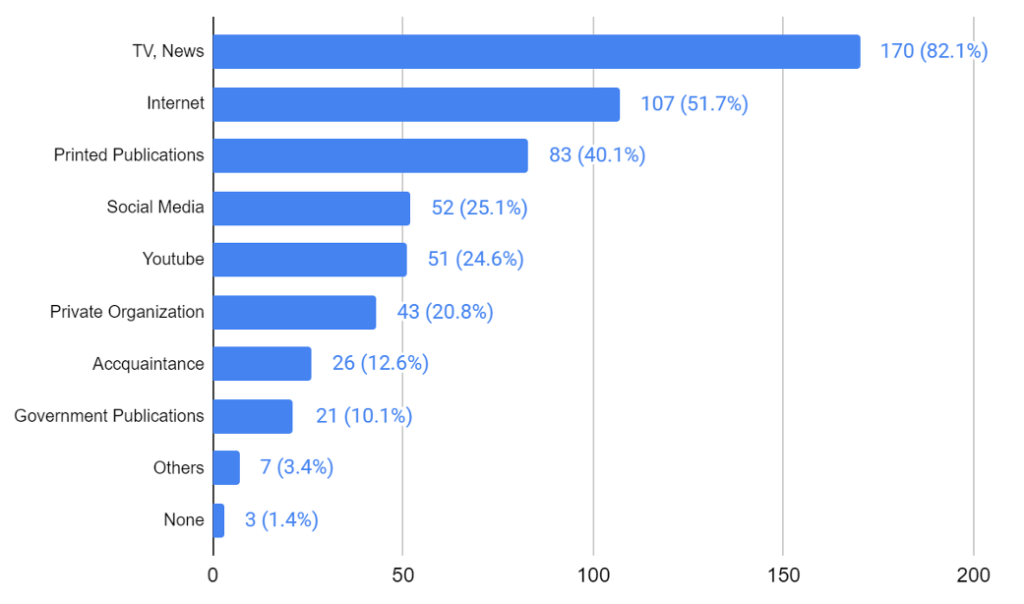 Media is widely known for its influence on people’s perceptions and behavior. If a news report is biased, the readers have a higher chance of being influenced by it. From this, we can indicate the media as an influential source when it comes to understanding foreign nationals. This is especially important in the digital era where information is obtained through mass sources of media. When Yemenis refugees entered Korea through Jeju Island, numerous fake news spread through various platforms such as Facebook, Twitter, and YouTube. Some described Yemenis as illegal workers and news centered around Yemenis that were committing crimes on the island. As Yemenis were alien to Korean society, many believed in fake news. Thus, the media should be aware of its impact and prevent reporting any fake news that could bring misconceptions of refugees to their viewers. Since television, the Internet, and social media are major sources that convey information about refugees to society, the media has the responsibility to fact-check their articles and cross-reference their sources.

In conclusion, what should be the role of the media when it comes to refugees issues? The role is not only upon the journalists but also the individuals who receive the media. Media and journalists should acknowledge their influence on public perception and understand the circumstances when portraying refugees. By depicting them as job-hungry, illegal immigrants who create crime and trouble for the locals, they are initiating hate towards an already marginalized and vulnerable group. This generated negative sentiment deprives refugees of future opportunities of employment, education, health care, leading to discrimination and isolation in Korean society.

Simultaneously, the roles of the individuals are important. The public should be critical when perceiving media and comprehend articles that are biased towards refugees. By understanding the negative perception and connotation prevalent in the media, the public will be able to maintain a critical mindset towards the news and gain empathy and compassion towards refugees residing in Korea. This proactive mindset of not receiving news as it is, but questioning the intention and credibility behind it, is crucial to create an integrated and inclusive society for refugees in the future.